On Dec. 31, 1995, the Calvin and Hobbes comic strip made its final appearance in print. That day, a little blond boy named Calvin and his real-when-Calvin-was-around stuffed tiger named Hobbes jumped off the predictable page of weekly-installments and into the magical world of our unformed imagination: 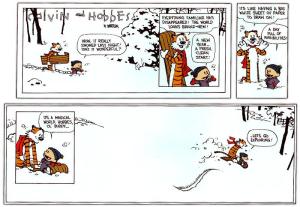 Calvin and Hobbes, by Bill Watterson

A stuffed tiger with fierce love for the boy who never gives up believing in him, Hobbes was my generation’s Velveteen Rabbit. Unlike the rabbit, Hobbes never quite got to become real, but he was real enough to be witness to Calvin’s fearless love of adventure and sharp-edged commentary on social justice.

This week Calvin and Hobbes came through again for me. A child of the ’80s, I rediscovered this strip during my own final appearance of sorts, going into my last Sunday of two years’ service as a bi-vocational deacon to my home parish of 13 years. After a month off, I will take up my new assignment – leading as head of congregation in a new church while continuing my remaining studies for priesthood. As a bi-vocational minister, I will continue to work my day job at a non-profit child advocacy center, commuting an hour to the church I will be serving, a small rural parish deep in the tall pines of national forest country. Like a good Calvin and Hobbes strip, the last few weeks of my home parish departure were a mixture of excitement, fear, humor and wonder. I’d never left a ministry before, so I wasn’t sure what my exit was supposed to look like.

By Sunday evening, after two final worship services and Rally Day festivities, I was on the couch staring at a blank TV screen, completely spent after an exhausting week of goodbyes and last moments mixed with the strain of disentangling oneself from a hundred pastoral relationships.

I’d like to say I received some great revelation from the Holy Spirit in my hour of need. But after sitting numbly for awhile, what came to me was something I’d seen a few days before. It was the first panel inset from the last Calvin and Hobbes strip, as the two pals are heading out, wooden sled in tow, into the woods covered in a night’s untouched snowfall. “Everything familiar has disappeared! The world looks brand-new!” Hobbes says. “A new year … a fresh, clean start!” Calvin says, arms thrown open wide. “It’s like having a big white sheet of paper to draw on,” Hobbes says, as the strip moves forward. “A day full of possibilities. It’s a magical world, Hobbes, ol’ buddy,” Calvin says, as they hop on the sled and launch down a snowy hill. “Let’s go exploring!”

I’m not sure if God often works through comic strips. But in that moment, I stopped feeling sad and realized I had a gift to receive if only I would throw open my arms to embrace it – an opportunity at a fresh, clean start forging new ground in bi-vocational ministry in Deep East Texas – together with a congregation, a big white sheet of paper to write our new ministry on. I’m excited about the possibilities of where God will lead us.  Maybe that wasn’t a great revelation, but it was what I needed to make my exit. And that’s pretty great.